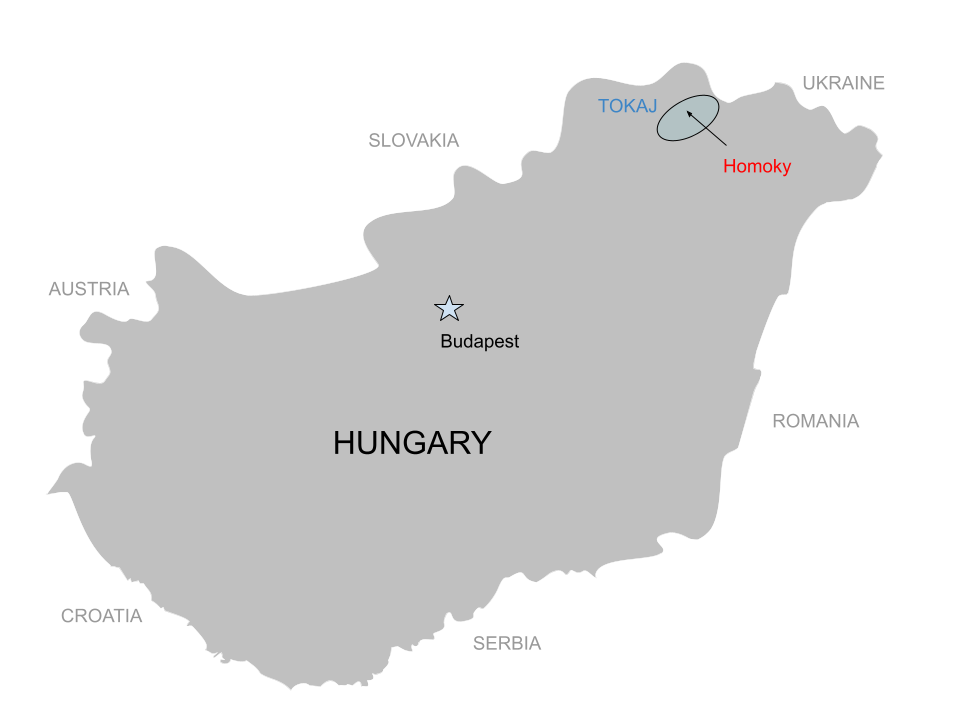 Starting with just 1 hectare, Dorka's parent’s rules were simple: You must harvest it. You must make it. You must sell it. 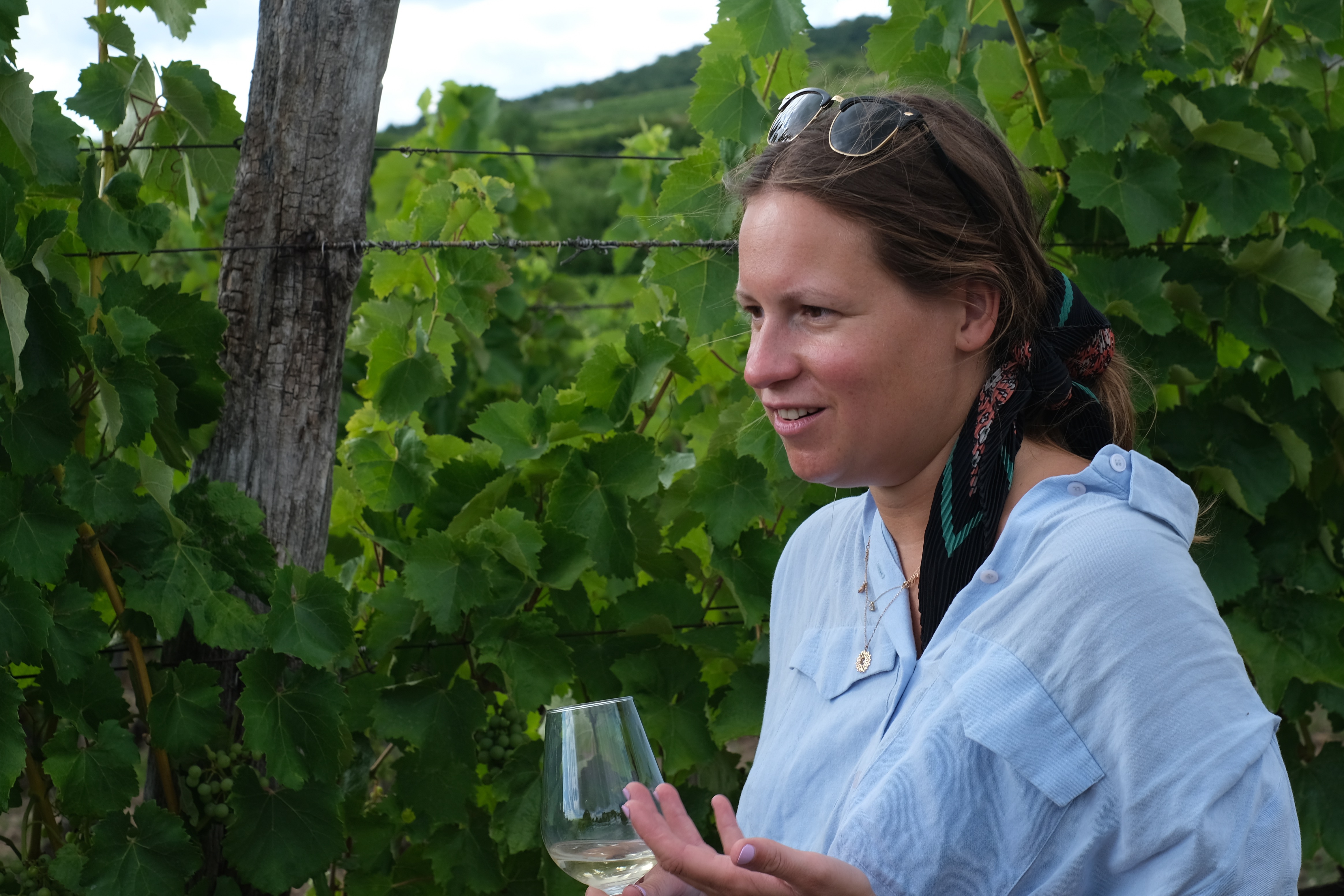 Dorka Homoky in the vineyard

Dorka represents yet another dynamic generation coming of age in Tokaj. She’s among the first to grow up in an established community of female mentors as well. Just within our portfolio, people like Judit Bodó (Bott Pince), Sarolta Bárdos (Tokaj Nobilis) and Stéphanie Berecz (Kikelet) have all been hugely influential just to name a few. This generation also has a vested interest in the younger generation building upon their efforts and continuing to inject vitality and growth into the appellation as a whole. Dorka is also pushing the envelope in terms of low intervention winemaking, organic farming, extended skin macerations, mixing grapes and fruit, and helping pioneer new sparkling wines. Quantities are extremely limited as this is still a very nascent project, but we are confident it will slowly grow into something that fits our needs. This isn’t the first time we’ve witnessed this kind of phenomenon in Tokaj over the past decade. 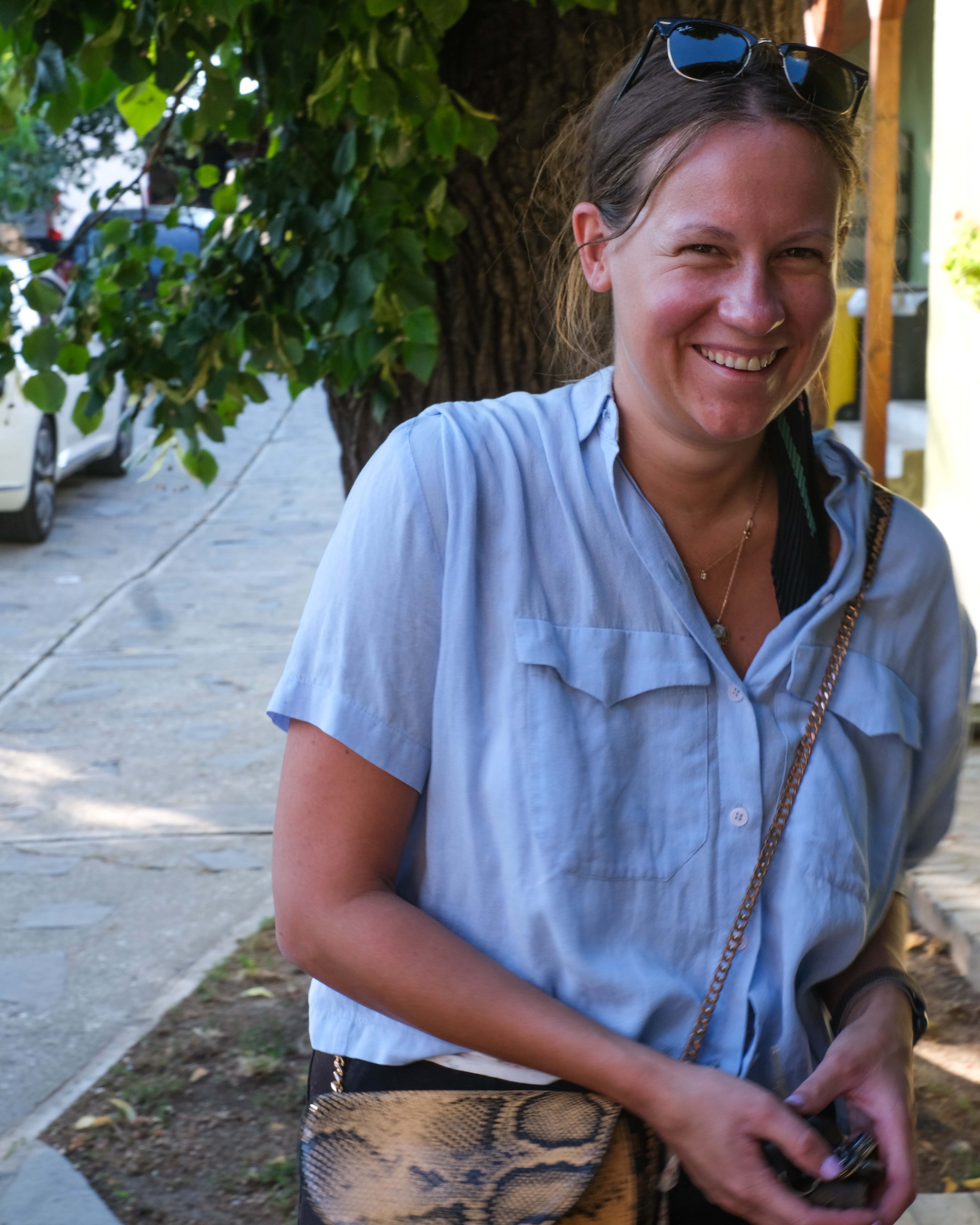 Dorka is a fourth generation winemaker in the village of Tállya in the southwest corner of Tokaj. Her Grandmother managed the vineyards and sold to the COOP during Communism and her parents restarted commercial production during the early re-privatization period. While vineyards, wine on the table and cellars were ubiquitous during her childhood, she never considered wine a career.

Her first degrees were in film and philosophy and most of her time was spent in Budapest. Her parents never pressured her to enter the wine business and they supported her other interests. However, the years away from Tokaj gave her the distance and change in perspective she needed. She started to experiment in the vineyard and cellar bit by bit. In 2016 she made the leap and spent half a year studying viticulture in Lyon where she was also exposed to natural wines followed by a harvest in New Zealand. 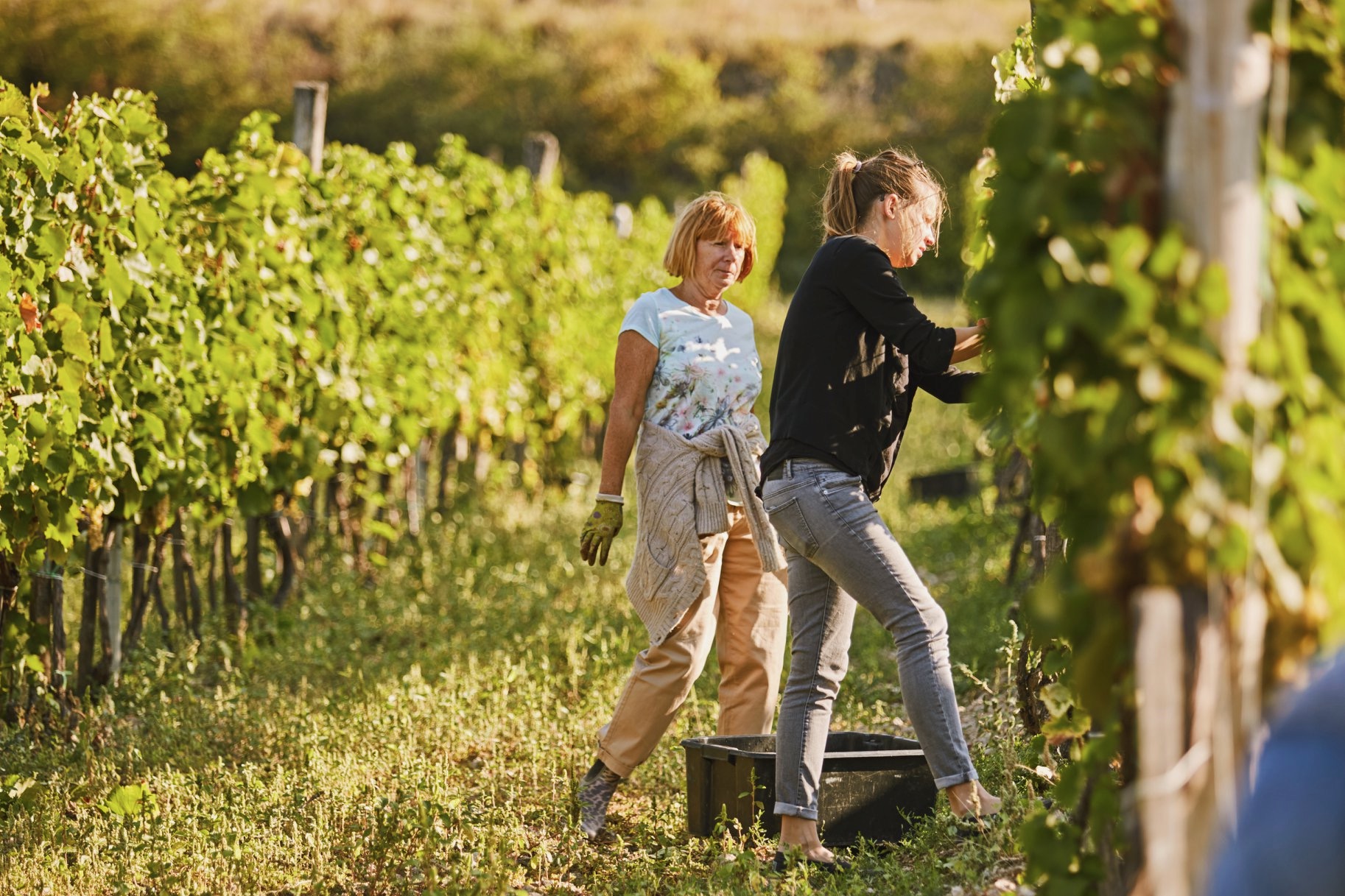 Harvesting in the vineyard

She feels beyond lucky to not only return home to an iconic wine region, but also to her family’s experience, traditions, and support. At this point, her contribution to the family is her enthusiasm, relentless energy, and the perspective of having left to see how truly special this slice of Hungary is. Starting with just 1 hectare, her parent’s rules were simple: You must harvest it. You must make it. You must sell it. 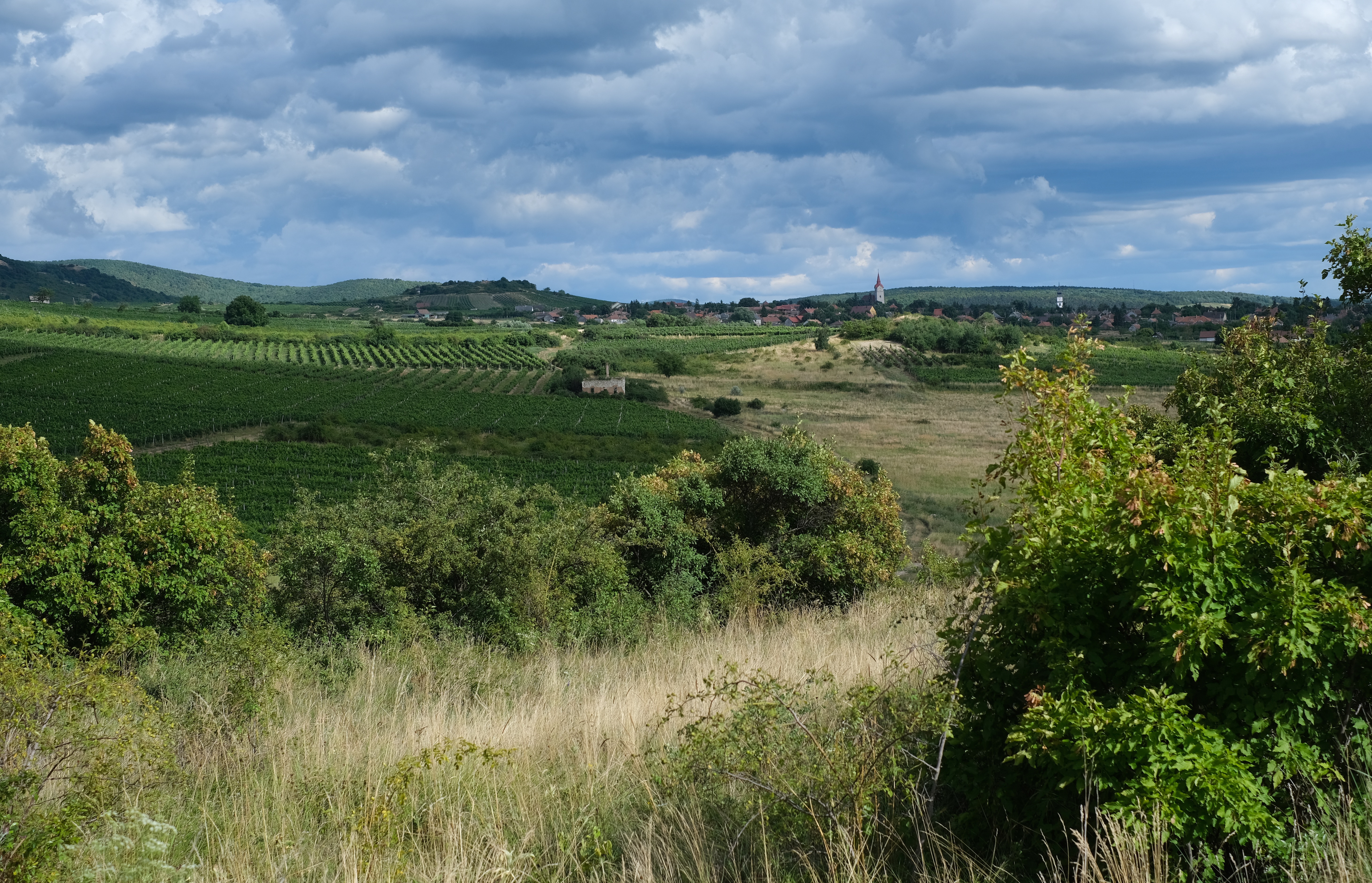 Dorka has since increased to 3 hectares spread across the single vineyards (dűlő) of Hetény, Dongó, Görbe, Bártfai, Sas alja, and Nyergesek. While 300+ years ago Tállya was one of the largest villages in Tokaj and arguably boasted the majority of 1st class sites, today it’s not nearly as developed as other villages, has less than 2000 inhabitants, and only a couple of restaurants. Nevertheless, it’s becoming an incubator for organic farming, there is land available for sale, and a community of like minded growers taking root and helping one another. Tállya is also generally windy and further from the Bodrog River than many other villages, but humidity (namely black rot) can still be an issue. While botrytis at the right time is welcomed, there’s a constant dance between having a lighter canopy to promote airflow and too little risking sunburn. This is especially the case when converting to organics.

Like the rest of Tokaj, the soils here are heavily volcanic. In this southwestern corner of the appellation, andesite dominates many of the sites along with ryholite and a few pockets or loess typically only found around the villages of Tokaj and Tarcal. 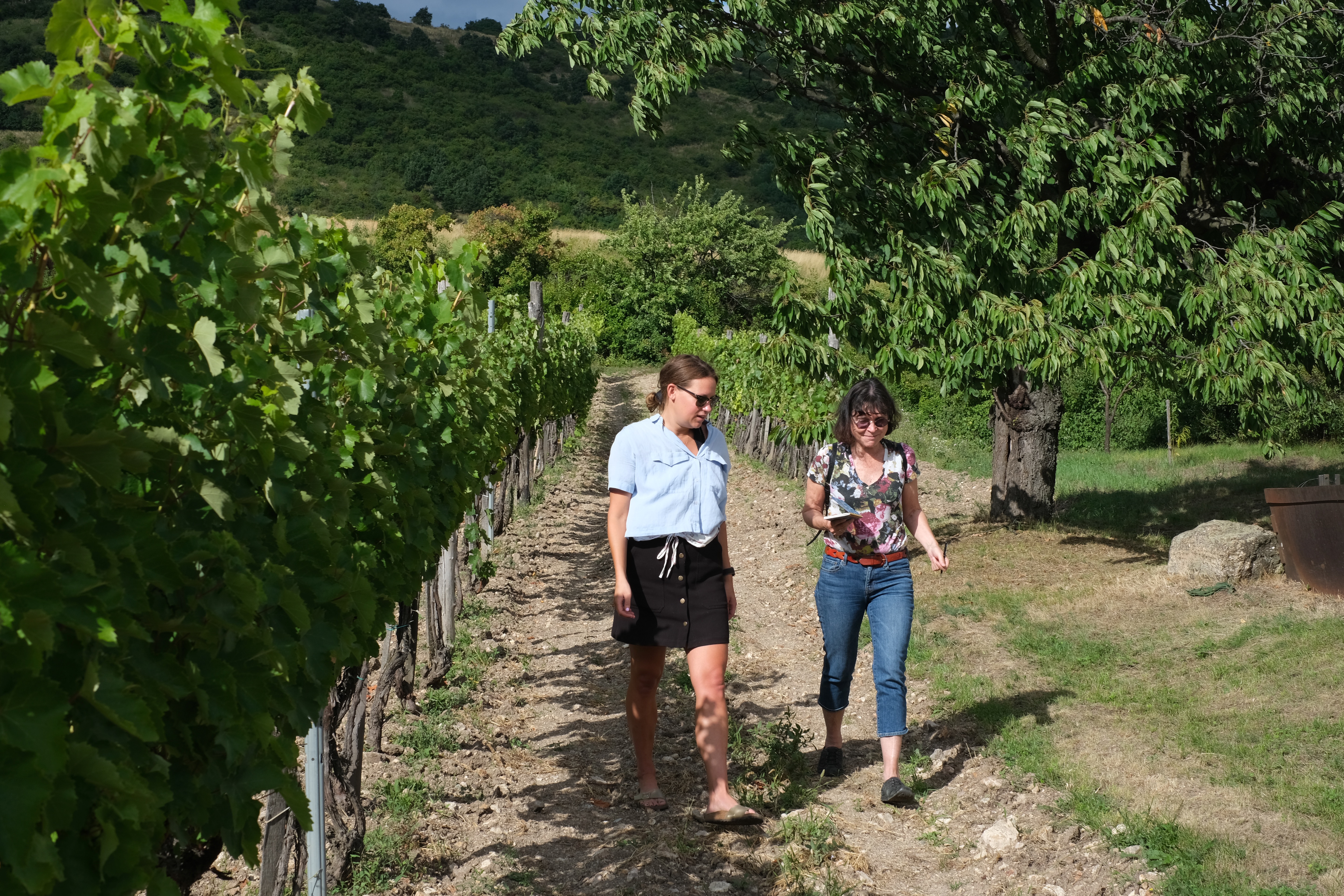 Catherine and Dorka walking in the Dongó vineyard

The Dongó (Bumble Bee) vineyard is Dorka’s favorite running spot. Tucked up in the northwest part of Tállya, it’s also a 1st Class Dűlő from the historical classification in the early 1700s and is mentioned in writing as early as 1561. The bedrock is rhyolite with quite a bit of detritus. Dorka grows both Furmint and Hárslevelű here and the fruit goes to both dry and skin contact wines. 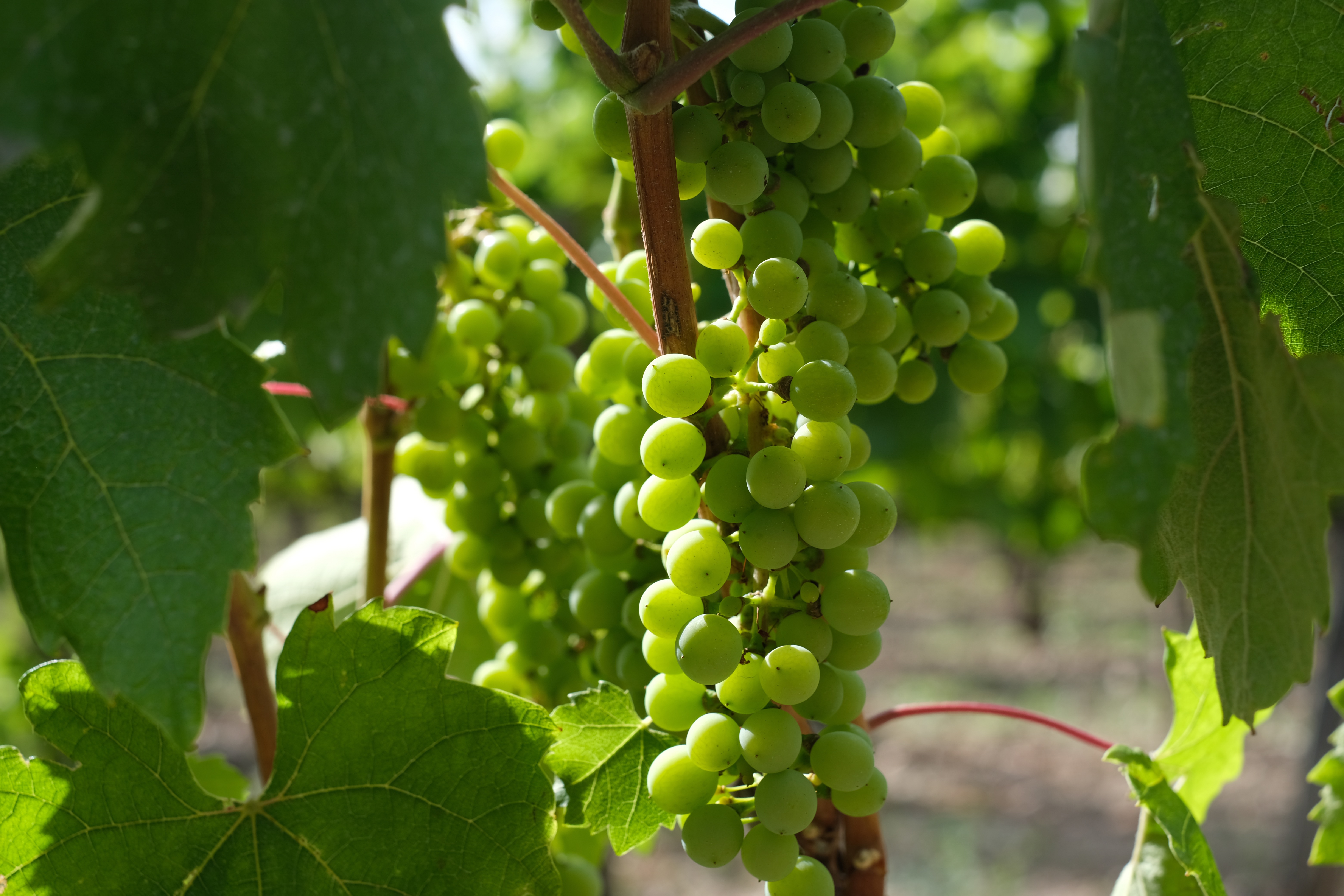 The Hetény Dűlő is also mostly Rhyolite but with much more clay and a little bit of loess as well. First mentioned as early as 1298, this is quite a heralded location. Furmint and Hárslevelű dominate the plantings and the clay and better water retention yield really bright acidity. This is one of the ideal sites for her sparkling wines.

The Nyergesek Dűlő (saddle vineyard) produces bright fruit with often hard acidity. The acidity is so sharp from the andesite heavy soils that it needs to be tamed by either maceration, sugar and or age. First mentioned in 1469, this is mixture of Furmint and Hárslevelű and is ideal for her sparkling wines. 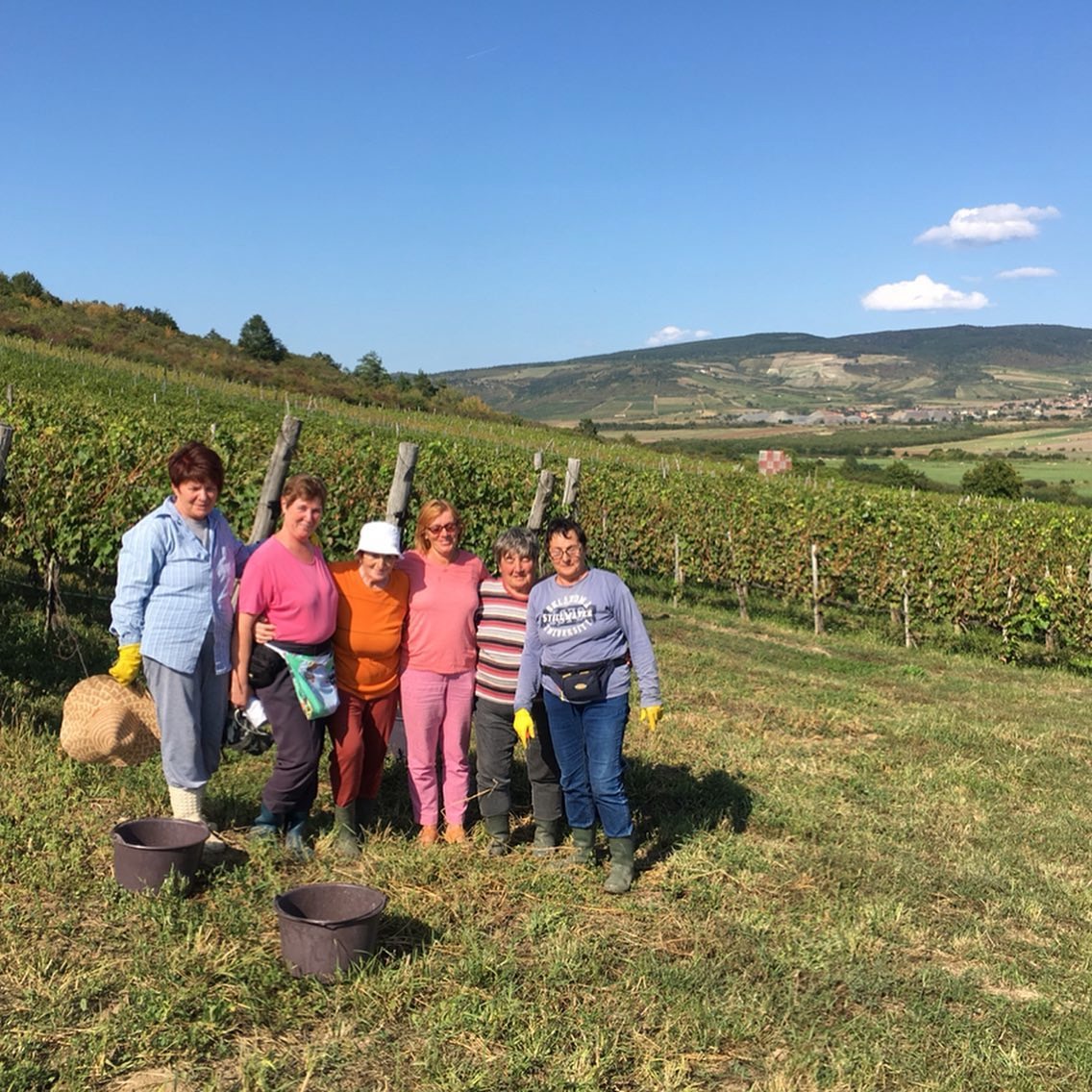 The harvest crew at Homoky Dorka

The Sas alja Dűlő translates to the “bottom of the eagle” and most likely comes from Szász (aka Saxon) but written in the Latin form of ‘Sas.’ Not sure what the take away from either is, but the andesite bedrock here produces, as Dorka puts it, “dense character.” Planted to both Furmint and Hárslevelű, the aromatics jump out in a very non Muscat way, the acidity is well balanced, and is unlike any other dry Tokaj in the whole portfolio. 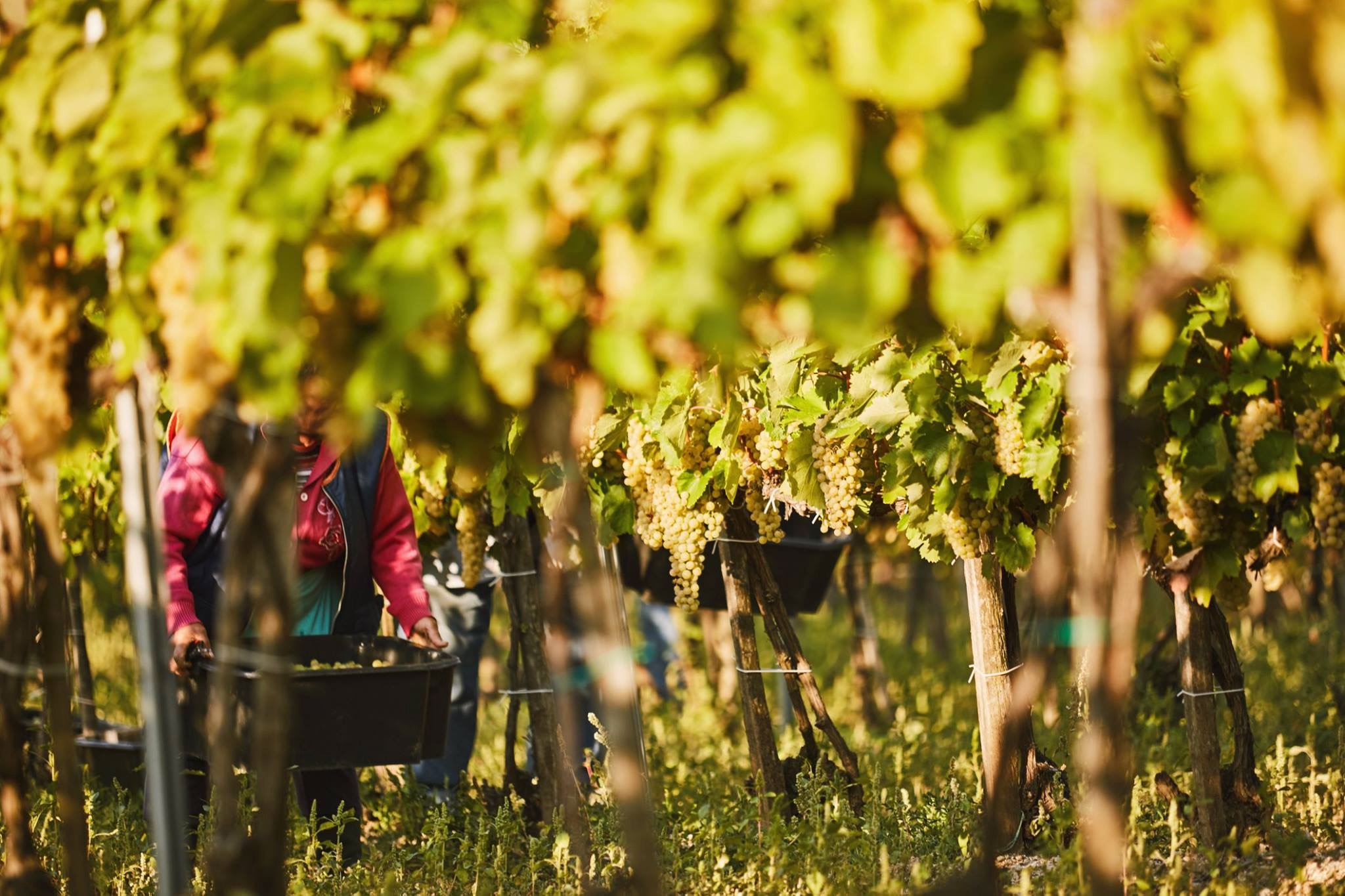 The Bártfai Dűlő falls along the northern end of the andesite mountain range. This is more or less dedicated to Furmint and is incredibly noticeable as a distinct site across multiple vintages. Tons of structure, the acidity doesn’t dominate as often can with Furmint, and there’s probably good reason written accounts of this vineyard date back to 1487.

According to the historical classification system, the Görbe Dűlő is another first-class area and was first mentioned was in 1644. The bedrock is rhyolite with a healthy layer of mixed volcanic clay as well. Super distinct on it’s own with some age, it also grows most of her Sargamuskotály as well. 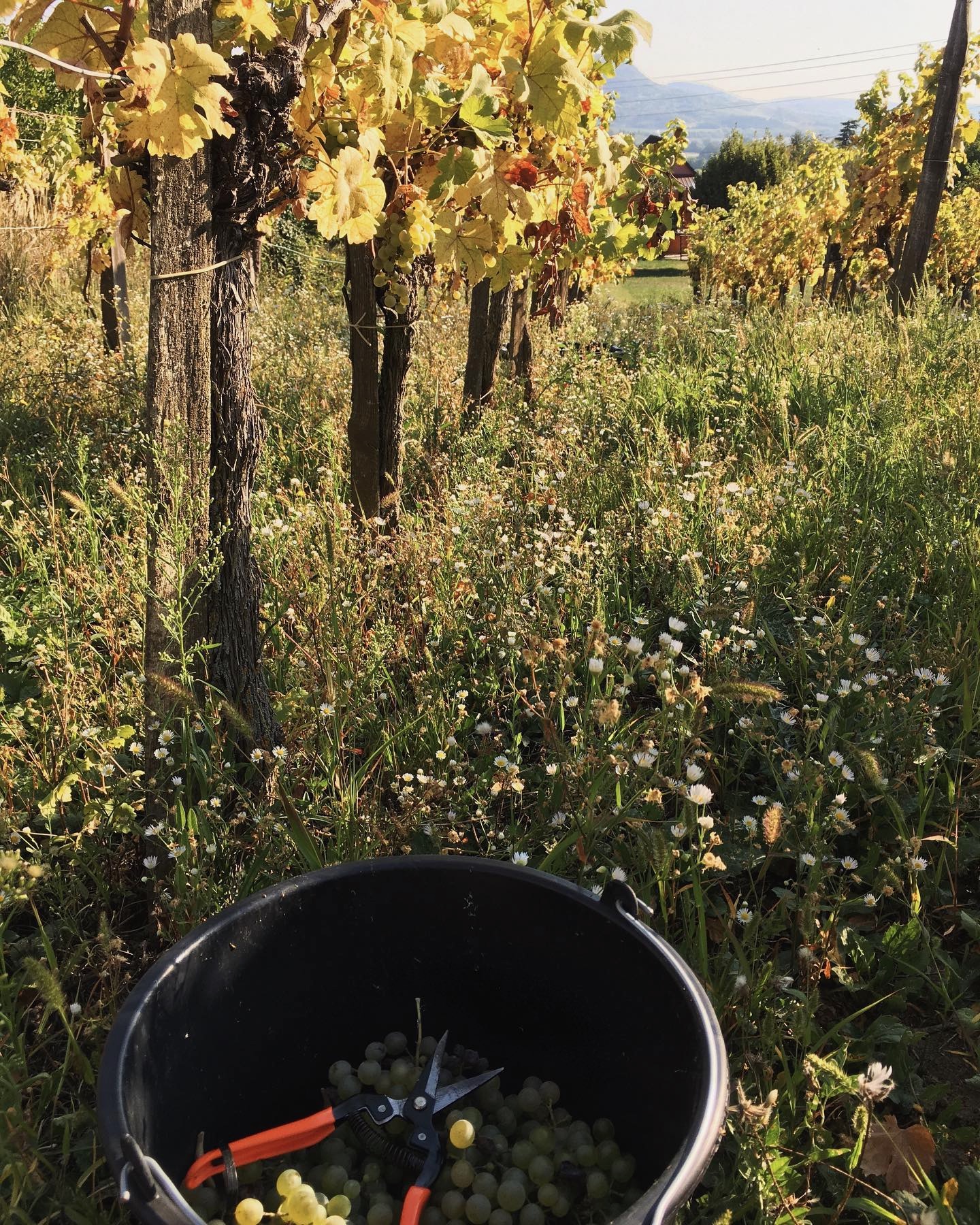 All grapes are hand harvested, destemmed and then pressed without crushing. Most lots are spontaneously fermented in stainless steel, then aged further on the lees in stainless along with shorter élevage in barrel due to most of her barrels being so young. All wines are bottled without filtering or fining and the only addition is SO2.

Whole cluster pressed and fermented in stainless steel. After primary, about half spends 2 months on the lees in Hungarian oak barrel while the rest stays on the lees in stainless. The two lots are blended and then bottled without fining or filtering. While we’d prefer to give this wine a few years before release, Dorka recommends a little shake to move the sediment around and jump start the bottle. It’s recognizably Tokaj right off the bat but in a far more raw yet ready to drink fashion.
Download PDF Fact Sheet

This is roughly 60% Furmint and 40% Hárslevelű from the Dongó, Hetény and Nyergesek vineyards. Spontaneously fermented in stainless steel and then bottled with 14 g/l residual sugar. Bottled without disgorgement, there’s a lot happening in this bottle. Definitely give a proper chill and expect a little extra excitement at opening. Nothing in terms of major loss, but have a glass ready as a little with froth over the top. Tokaj isn’t lost in the pét-nat-ness, but it’s very similar to barrel tasting in Tokaj if you then added the alcohol and acidity of a finished wine. This is only her second commercial release and among the very first pét-nats from Tokaj to reach the US market.
Download PDF Fact Sheet